Imagine painting for years and never considering yourself an artist. At some point around the 1960’s people consciously began to cobble together their beliefs via numerous cultures, authorities, and religions instead of just the one they grew up with – rarely acknowledging the fact that they had become the architects of their beliefs. The era of Open Source Religion already began decades ago.

What is Open Source Religion?

Open Source Religion is when a Christian smudges a house with sage to drive away negative energy. It’s when an Atheist warns “karma can come back around to get ya.”. It’s when a child believes that red is the most powerful color. All beliefs, religious and non-religious, are now accessible to all people because we live in the age of Open Source Religion.

Open Source Religion is the era of humanity in which belief systems are created from numerous sources.

In a world where people unquestioningly accept the beliefs they are handed, conflict is inevitable. By accepting that we design our belief systems, we can accept that others do as well, and thus foster personal empowerment, empathy, and understanding of others. The intention of Open Source Religion is to empower people across the world with the tools to change their own lives and their relationships with other lives.

Open Source Religion has but one tenet

Solum Axiom – “The Only Lesson”

You are the architect of your belief system.

One of the most significant findings in Psychology, in the last 20 years, is that individuals can choose the way they think.

With this tenet comes the acceptance that, given the proper experience or information, you can or will change your beliefs.

Open Source Religion therefor operates as a “belief system framework” which boasts no particular beliefs, and yet in which all beliefs are supported. It should be as transparent as possible, existing solely to provide users with better decision making. A skeleton to build whatever animal you desire. If religions were represented by colors, Open Source Religion would be transparent.

OpenSourceReligion.com only provides tools, in the form of philosophical theory, for people to use or discard as needed; and a hub for socializing.

With Open Source Religion you don’t need to change what you believe, you need only to believe that you can change.

What Has Been Built With Open Source Religion?

MyMythos is a fork of Open Source Religion. Meaning that it carries the same principal (the code) such as Solum Axiom but has also had other tools and features baked in, such as: the Ultimate Self, Inner Space, archetypal relationships, Northern Star, and others. The finished version will be like the Pinterest for beliefs in which users can create, share, discuss, and collect beliefs to their profile. This will foster community across every possible belief system, religious and non-religious. Users can use the platform without ever bothering with the baked in features stated above, as they are part of course material sold separately on the site. 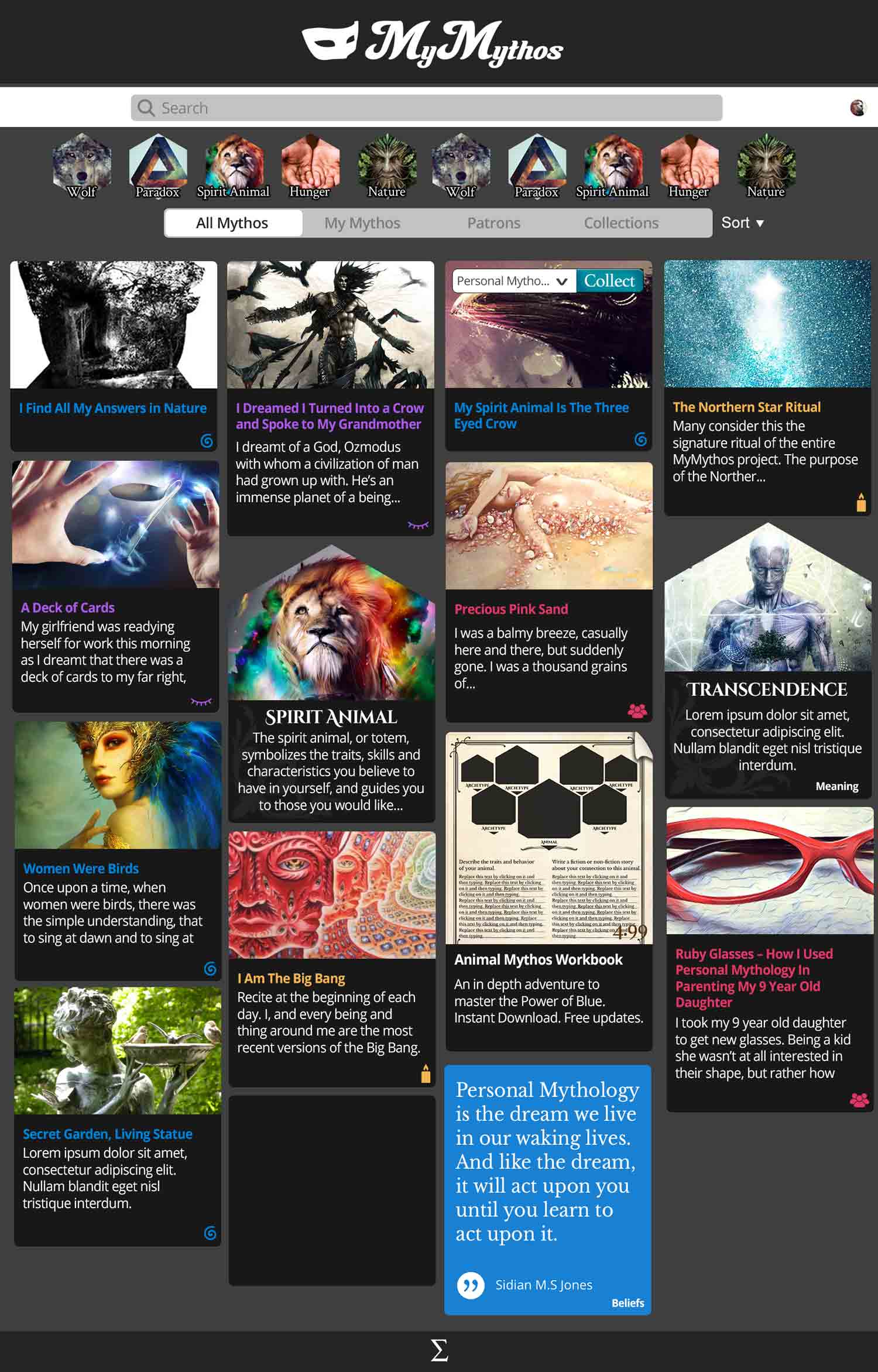 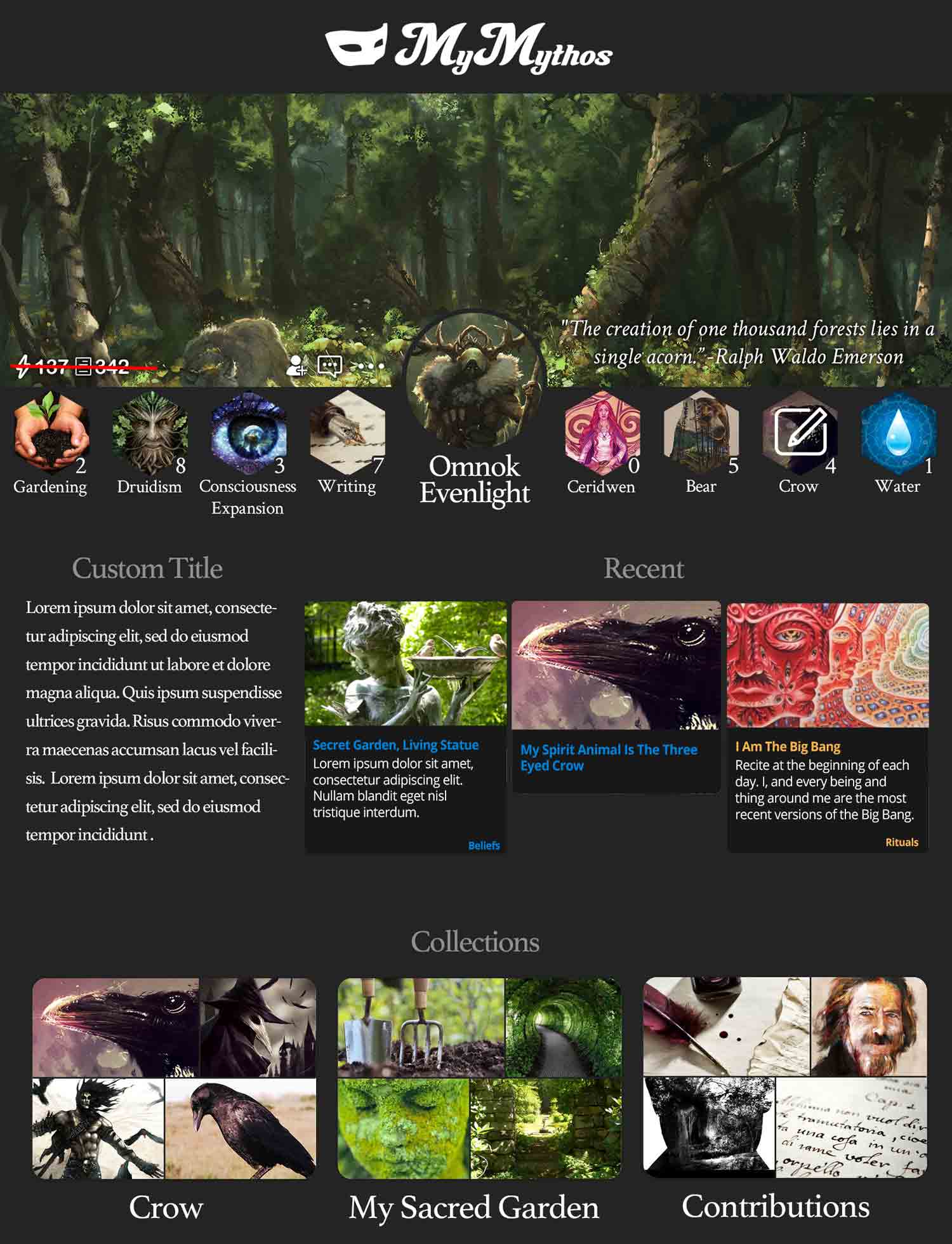 Users have found the following features of Open Source Religion to be of value:

Belief systems may be changed at any time, given appropriate new information or experiences.

One potentially core theory to OSR is that beliefs are viewed as modules to be adopted, edited, or deleted – building blocks of belief systems. Beliefs may be adopted from any source, religious and non-religious. Beliefs have parent/child relationships to one another.

Open Source Religion is a method in which belief systems may find more truth and alignment with their user because of the ever evolving nature of OSR, and thus the ability for OSR based belief systems to constantly adjust to the user’s needs.

An open framework means that a single belief system may house beliefs from across religions. For example, person who believes in both Jesus and karma.

When a spiritual authority makes a mistake, millions may adopt it. By remaining flexible, you can remain true to your truth, your Christianity, your Atheism, your anything. By open sourcing your religion you are better equipped to fight for the integrity and preservation of your religion.

Belief systems both religious and non-religious may be designed and used. They may even be designed for specific purposes or facets of a person’s life as can be seen in the Multi-Layered Belief System Installation theory.

Doesn’t choosing what to believe destroy the power of belief?

But to answer the original question, It depends how good you are at belief. It’s an art form. Imagine someone who has chosen the bear as a spirit animal and who lives in a cabin, hunts their own food, lives off the land. This person has invested a great deal into their belief. It took them years to dive as deep into it as they have, and years more to master it. Furthermore, the brain is a tricky, silly thing. If you show or tell it something long enough, it will begin to change. Immerse yourself in your new beliefs, see what happens. Change your mind, change your life.

The Idea That People Edit Their Own Belief Systems Is Nothing New.

True, even Thomas Jefferson heavily and famously edited his Bible 200 years ago.

The Ideas In OSR Are Obvious, Everyday Knowledge.

Some people know and utilize the ideas expressed here without ever knowing about Open Source Religion, this is true. However most people probably do not know about these principals, and for many people the ideas that we have such freedom of choice in our beliefs and can even purposefully create belief systems are very useful and can even change lives.

Athletes are capable of amazing feats and maneuvers. And even though almost anyone is capable of learning and executing these maneuvers, 99% of us would never know it was an option until we were shown or told we could.

Self help books have told people things they could have discovered themselves for hundreds of years, but they are still valuable because no single person can think of everything.

How do I practice Open Source Religion?

2. Be watchful of your beliefs.

3. Edit your beliefs as you see fit.

It is both antireligious and religious.

It’s anti-religious for people who want/need it to be because it can break down the idea that one must subscribe to a prepackaged religion without question or customization.

But it’s also deeply religious in the sense that those who choose their beliefs within the Open Source Religion framework (be they from Abrahamic religions or not) do so because they have great conviction for them, and not just because those beliefs were handed down to them. These people have actively chosen their religion knowing fully well they are the architects of their beliefs.

Why is Open Source Religion Important?

Open Source Religion provides an opportunity to clarify, organize, and evolve the natural human habit of culminating beliefs inside and outside a religious context. We’ve spent centuries cataloging people, in primarily about a dozen popular labels (Christian, Muslim, Buddhist, Atheist, Agnostic, Jewish, Wiccan, Spiritual, etc), all the while ignoring the far more accurate fact that people’s belief systems are customized, especially when you take into account non-religious beliefs (e.g. red represents power). This is a gross oversight of one the most important aspects of the human experience – the very way we individually experience life.

We even see this trend within Proprietary Religions themselves. Saying someone is a Christian these days is like saying a dog is just a dog and neglecting the fact that there are thousands of breeds with different temperaments and builds. At some distant time in history perhaps anyone called “Christian” truly believed 99% the same things as the next Christian. That time has passed, and that level of homogeneity may never be seen again. It is through this lens that you will begin to see how long OSR has existed, how it has been evolving through time, and how far it has come.

Empathy is perhaps one of the only binding human experiences based in emotion that can bring two very different people together. When you approach someone from the perspective of OSR; you stop seeing them as someone who just is some stereotypical amalgamation of their culture and labels and you start seeing them as someone who has chosen, like you, a unique compilation of beliefs for very personal reasons. It’s very difficult not to have understanding and empathy for someone once you see this.

A community of Open Source Religion users helps you to self reflect on your belief system, module by module. Which modules create separation? Which create empathy? Which could be edited? Which contradict one another? Which create negativity?

It gives religious and non-religious people a single common ground on which to communicate.

Open Source Religion is the future of religion because its adoption has already come to pass. Billions today practice the art of OSR and will continue to interact with belief in ever more unique ways; we will continue to forge new religions, and the grindstone of time will continue to cleave new facets into the spiritual experience, giving old gems interesting new reflections.

The use of OSR is old, but addressing and utilizing it is quite new. 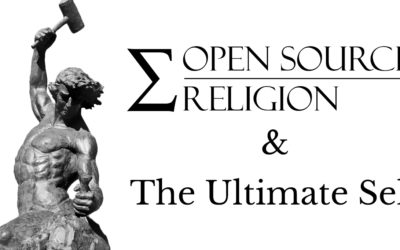 Open Source Religion and The Ultimate Self

If the practice of Open Source Religion is principally based in Accepting the Solum Axiom - you are the architect of your belief system,engaging the consciousness to be watchful of your beliefs, andediting your beliefs as you see fit, then it stands to reason that... 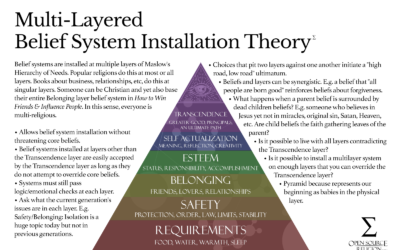 Belief systems are installed at multiple layers of Maslow's Hierarchy of Needs. Popular religions do this at most or all layers. Books about business, relationships, etc, do this at singular layers. Someone can be Christian and yet also base their entire Belonging...